Soft Tissue Lasers: Gingivectomy is a procedure used for gingiva removal. It is indicated for someone who wants to achieve esthetics. Gingivectomy may be used if the suprabony pockets have been present and there is access to the osseous structures which is not always important.

BOOK YOUR APPOINTMENT
Table of contents

Soft Tissue Lasers: Gingivectomy is a procedure used for gingiva or gum removal. It is indicated for someone who wants to achieve high esthetics. A gingivectomy may be used if the supra body pockets have been present and there is access to the osseous structures which is not always important. This procedure helps to decrease gingival tissue if there is enlargement with the altering of the fibrotic gingiva. However, this procedure is not indicated in the person who has an osseous foundation that is in critical health or if the gingival attachment is absent or is minimal.

The Benefits of Laser Gingivectomy

Research supports that resecting the gingiva using a dental laser will improve access due to better visualization, which then aids in sealing of the lymphatic and capillaries when laser radiation is used. Laser resections allow lower levels of myofibroblasts which then leads to no wound contraction which means less scarring.

Wound healing highly depends on the device setting and the type of laser wavelength used on the tissue. Therefore, laser knowledge of your dentist is extremely critical in providing you with highly recommended tissue healing and result.

Electrosurgery is also another alternative to dental laser therapy but it is not as detailed in its tissue interaction. Electrosurgery uses heat ablation upon interacting with the tissue. There are two types of electrosurgery units: bipolar and monopolar. Bipolar is the preferred unit because it generates no lateral heat and therefore can be used in a wet environment.

Do I Need Cosmetic Gum Reshaping? 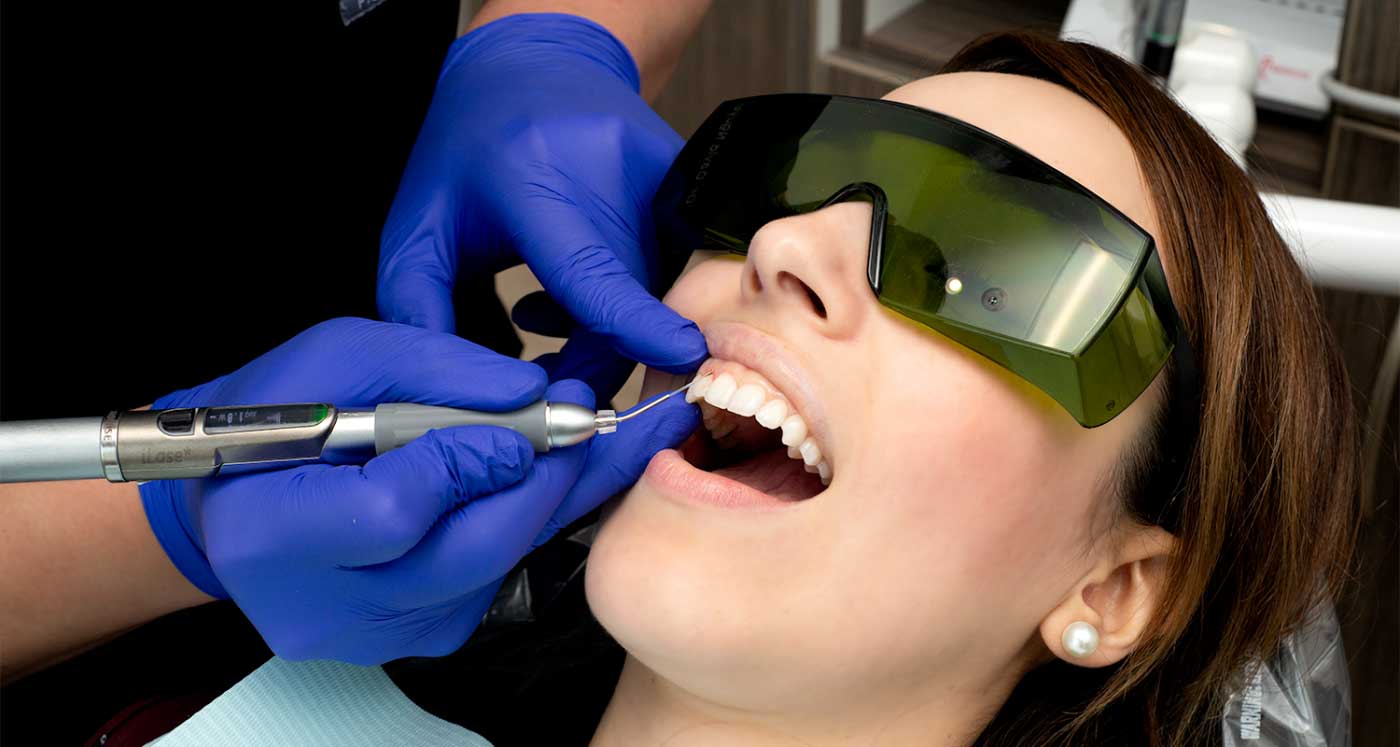 Do you suffer from a gummy smile?

Talk to one of our highly skilled dentist about your smile goals.
BOOK YOUR APPOINTMENT

Do you have an uneven gum line that you want to fix?

We can help! Schedule your dental appointment with one of our highly skilled dentists today!
BOOK YOUR APPOINTMENT

How Laser Gingivectomy Is Performed?

The first incisions during a gingivectomy work the same way as when a blade is used to cut the tissue. Where the incision is placed will depend on the depth of pockets within the gingival tissue. The first cut depends on the measurement of the pocket depth. Caution should be taken in the angulation the laser is reflected because interactions between laser and hard tissue can lead to tissue damage. To prevent this from happening the correct setting and power should be used. There are also reflective barriers used within the sulcus to prevent the laser wavelengths to stray so that they do not interact with the rot surface of the tooth. When there is a soft tissue, the mylar and the metal nature of the barrier reflects laser energy far from the tooth. After the gingiva is cut or excised, the power-driven ultrasonic scaler will be used for debriding the root surface with better visualization, thus resulting in a more successful and effective debridement.

The sculpting ability of the lasers and gingivoplasty may be done at the gingival margins to ensure parabolic appearance.  Erbium laser will create homeostasis if the procedure is done through altering the laser parameters in order to seal off the blood vessels.

Gingivectomy is a type of periodontal surgery and it heals and removes the disease surrounding the gum tissue caused by bacterial build-up underneath the gums. For someone who is suffering from chronic gingival inflammation, gingivectomy may be used if other nonsurgical methods have been used in the past and were ineffective in producing healing results. Gingivectomy can be performed in a dental office and is done one quadrant at a time with the use of local anesthetics. The prognosis and success of the procedure is related to the level of attachment to the gums. Anything beyond a gingivectomy that go deeper into the periodontium will involve the regeneration of the attachment structures by the use of bone grafts and tissue.

Periodontal surgery may be performed in order to eliminate or to alter microbial factors that cause periodontitis. Periodontal disease involves the host’s condition and microorganisms like the immune system which may affect the gums and the supporting structures of the teeth. If the gingiva had been affected by the plaque-making bacteria due to immune suppression or lack of oral hygiene, the bacterial conditions for periodontitis is heightened. If the cause of periodontitis is not removed or addressed, then it will progress and worsen. In some severe cases, a gingival graft surgery may be needed in order to restore the tissue ligaments with bone tissue which has been destroyed because of pathogens.

Are you ready to change your smile?

Let us help you achieve the smile you’ve always wanted.